From Tradie to Techie 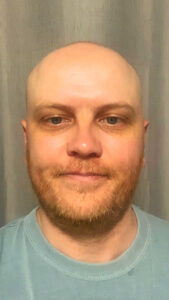 My role here at FinoComp as a software developer involves doing a bit of everything! I work broadly across the business and have not moved into one speciality.  I have been here for a year and have split my time equally working on both front and back-end development.

Before working at FinoComp I was a qualified electrician and had worked in the lift industry for twelve years, so making the switch was a huge career change. This time was broken up by a stint spent living in the UK, near Putney Bridge which was an awesome experience.  Whilst in the UK I had a several jobs including dog walking and other lift related work, which helped to fund the typical “Aussie thing” of travelling through Europe.

After arriving back home, I then decided to start my own business, so set up as an electrician in the lift industry.  This was all going great until I had an injury at work and was advised by my surgeon to move away from this profession.  I did not know what I wanted to do but knew I wanted to study.  I had a friend who had started software development later in life and he made the profession sound really interesting and was able to point me in the direction of some learning resources. Having done a number of “taster courses” I then decided to pursue a degree at the University of Wollongong as a mature student. I had a great time there and learnt a lot. It wasn’t easy though and for the last year I was jugging both full time work and full-time study which taught me a lot about time management (and not having a life!)

Although a significant career change, I have noticed there are actually a number of similarities between the roles. Software works with lots of logical operations tied together to perform a set of defined actions, lifts work by chaining lots of mechanical and electrical components (relays, switches etc) together to do the same thing, and once finished you have something built and ready to use by a user. The same is true for how you go about problem solving. In my work as a lift technician, we were often tasked with resolving problems, usually relating to processes not finishing correctly. Although completely different in the sense that one deals with data and the other electricity, they both fundamentally involve trying to isolate the problem and work backwards until you find the root cause.

How was the onboarding process for the new role?

When I started here a FinoComp we were in and out of lockdown so the majority of my on-boarding process was remote.  By the time I had started at FinoComp all these processes were in place, so it was a seamless process.  I had fantastic support and our HR manager Leanne does a great job taking on feedback and acting on this so next lot of Finterns have an even smoother process! I also had some good mentors, in Kyle, Amelia and Pat C. The Finternship was an awesome way to make the career transition. At first it was quite overwhelming, we were being introduced to new tech every day, some of which I didn’t know existed. That being said, I learnt a lot and having someone there who I could work with who was helpful and very patient was invaluable.  Having come from a trade background I also found there was a difference in culture. The people I worked with at FinoComp have been incredibly helpful and friendly and very open about sharing knowledge. We are also very well looked after, receiving unexpected easter egg baskets, getting to spin the birthday wheel and so on. It really is a great culture and a fantastic place to work.

Looking back on the year I think one of the things I most proud of is finishing university.  This was a real personal highlight.  In addition it was great being given the opportunity to do for the Finterns what I had done for me; I was able to go full cycle, supporting the Finterns and mentoring, as I had been supported when I began my new career.   When I started, I thought the role was somewhat overwhelming, but it really is incredible how much you pick up without realising. In our industry the tech moves forward fast, it is important to keep up.  It is great being exposed to all the changes in our industry and to be working on exciting developments in financial sector, many of which have not been done before.

What do you like to do outside of work?

I was sporty once upon a time but I have delved into older life quite early!  I am an avid traveller and have been travelling pretty consistently since I turned 18.  I’m particularly fond of Europe and having lived in London I see the UK as my second home, although I do enjoy watching England lose the Ashes/ world cup or pretty much any sport! I am really looking forward to things opening up again so I can get back into some holidays, this is the longest stretch I have stayed in one place since I was 18, but University and my new career have certainly kept me busy enough !